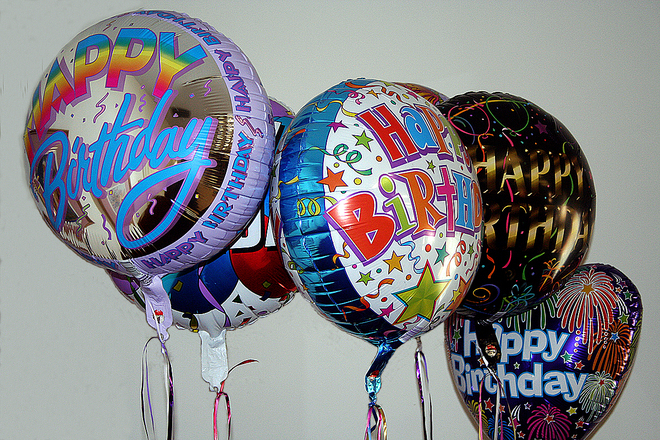 RMT Direct celebrated it third birthday last month.  It was registered as a domain 3 years ago on Oct 12, 2012.

Looking at the ‘wayback machine’ – an excellent web tool for snooping at a companies past, you can see how far RMT Direct has come.

RMT Direct was founded by Ryan Mellor and Charlotte Till and ‘RMT’ stands for Ryan Mellor Till.

RMT Direct has grown to a 24 seat call centre and is now ranked #1 on Google UK for financial advice leads and IFA appointments and its aim is to be largest suppliers of IFA appointments in the UK.

RMT Direct currently generates in excess of 150+ IFA appointments every month and its latest creation due to be launched in Jan 2016, is a website that will be capable of generating 100 online leads per day.  http://www.find-a-local-ifa.co.uk

In 2015, RMT Recruitment was formed and RMT Direct Ltd became RMT Group (UK) Ltd in the process. RMT Direct is now all but a web portal and attracts around 300 unique visitors every month from around 20,000 financial advisors that operate in the UK.

At IFA Direct we divide the call into 4 parts, the introduction, expansion, home run and the benefits.

So many time newbies working in our B2C team, given any interest in the hook part of the call by the prospect will talk at the prospect rather than ask the who, what, why, where, when and how.

No doubt he had been so relieved from the previous 50 “not interested’s” that he fell into the classic trap of telling and not selling. Ironically, this approach would be more likely lead to boring the prospect or pushing the prospect away, rather than achieving the desired outcome of generating a need and booking an appointment.

Selling is asking the who, what, why, where, when and how. Asking for example “Who is your pension with?..How long have you had the pension….What type of pension is it….What is the value of your pension?

Once you have basic information regarding the prospect, you  then maybe armed to calculate potential savings from Annual Management Charges (AMC) . If you could demonstrate a £5,000 saving in AMC over 5 years before their 55th birthday, they are more likely to engage with you, take note and perhaps book and an appointment to see a financial advisor, rather than if you simply told them this.

You can thing bring other relevant benefits into the B2C cold call such as the possibility of transferring to a more flexible pension which they probably don’t have and need. Simple. 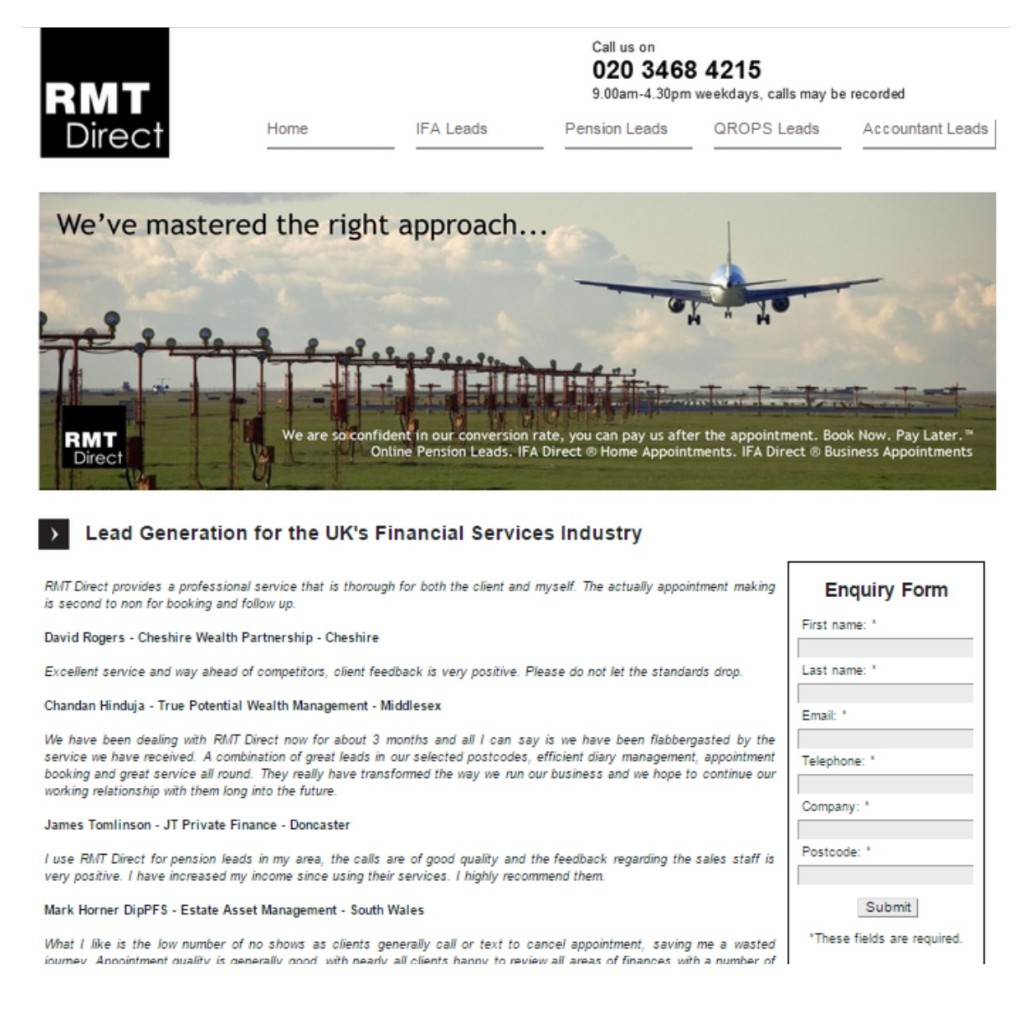 This achievement underscores RMT Direct’s key role in becoming the UK’s number one supplier. “Reaching £60 million is a great milestone. We are very pleased that our customers have recognised the value of our service and it is the results of our commitment to customer service that has enabled us to reach this milestone,” stated Ryan E. Mellor, Co-founder at RMT Direct.

RMT Direct is in a great position to expand further and has recently launched IFA Direct Business Appointments. “So long as we can continue to deliver a good service, we are definitely on our way to achieving 200 appointments per month,” added Ryan Mellor, Co-founder at RMT Direct.

The pension review appointments target individuals aged 35-55 with data sourced from major comparison websites. RMT Direct uses an initial call to explain the benefits of a pension review to generate interest through reducing annual management charges or transferring into a flexible pension scheme that allows full access to the pension from the age of 55. In a second call, clients that request a review of an existing pension are confirmed and then referred to its financial advisor members.

Feedback from the IFAs who use RMT Direct’s service conducted in February of 2014 found that 88% of its IFAs were satisfied with the service offered by RMT Direct.

In addition, recent feedback from the end users conducted immediately after their first appointment with the IFA, stated that 94% of its pension review appointment clients were satisfied with their appointment.

IFAs interested in learning more about pension review appointments can visit http://www.rmtdirect.com or should contact Ryan Mellor at 0203 468 4215 for more information.

About RMT Direct
RMT Direct is a leading financial services appointment making firm based in London. Since its inception in 2012 RMT Direct has been helping customers benefit from its call centre technology by providing cost-effective quality appointments and online services. The online services include generating IFA and pension leads at a local level.

RMT Direct appointments convert between 60-80%. We asked the following question to our IFA’s in early 2014. These are their replies. 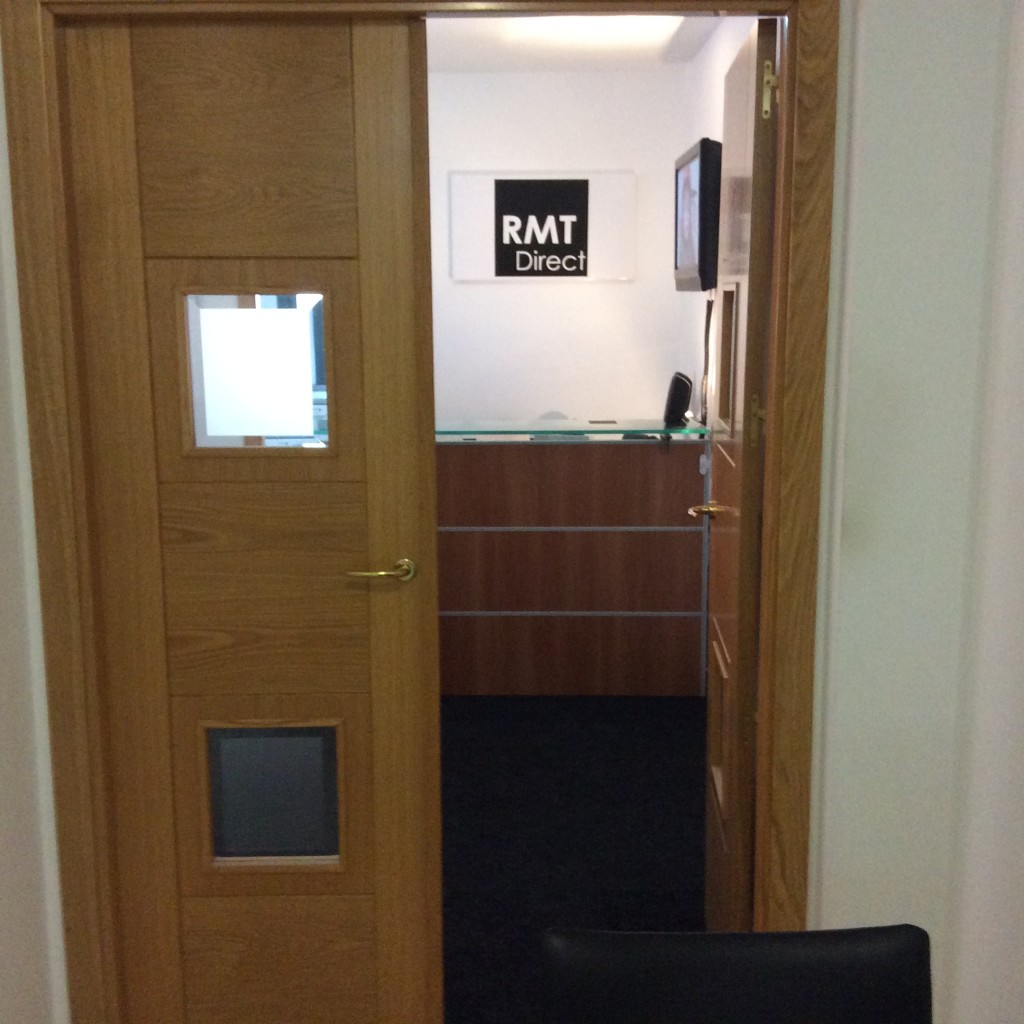 I use RMT Direct for pension leads in my area, the calls are of good quality and the feedback regarding the sales staff is very positive. I have increased my income since using their services. I highly recommend them.

We have been dealing with RMT Direct now for about 3 months and all I can say is we have been flabbergasted by the service we have received. A combination of great leads in our selected postcodes, efficient diary management, appointment booking and great service all round. They really have transformed the way we run our business and we hope to continue our working relationship with them long into the future.

Excellent service and way ahead of competitors, client feedback is very positive. Please do not let the standards drop.

RMT Direct provides a professional service that is thorough for both the client and myself. The actually appointment making is second to non for booking and follow up.

There are 3 types of telemarketers that come through our doors at RMT Direct:

1. Those that can do the job and love it.

In striving to employ staff at RMT Direct we are looking for staff that can do the job and love it, we look for the following qualities in any new staff.

Attitude – Without the right attitude and a strong work ethic, no amount or training or aptitude will make a person successful at booking appointments.

Can Sell –   Over the years at RMT Direct, we have found a huge difference between those can close and those that can’t. Although appointment does not involve selling anything directly, if you are more customer service than sales  – then appointment setting is probably not for you.

Resilient – Rejection is a very real part of booking appointments and part of daily life at RMT Direct, especially when focusing on cold leads. A great telemarketer isn’t easily discouraged.  Last year (2014) we had to go through 68,000 no’s to generate 1200 appointments.

Empathy – Telemarketers have to relate to the customer, it shows up as listening more than talking and empathising with the client before getting your point across.

Organised – Using the RMT Direct CRM efficiently and effectively, setting events and binning call backs that you can’t get hold is a key ingredient for a telemarketer to succeed.