Most people do not like the sound of their voice.

…..So we asked some of our IFA Direct Home co-ordinators to listen to one of their recent calls where they attempted to make a pension appointment. The idea being  to be as self critical as possible.

In summary, more questions and less babble is required at the IFA Direct call centre!  (or Geordie babble  for one member of staff)

The main point i noticed is i speak to much, keep saying basically and ok. The call was dragged out to long with someone who isn’t interested. Better questioning at the start would have saved half the call.

Jem
—————–
The call was sh*t to put it bluntly. I think he threw me with his yes, no answers.No exaggeration of “millions” or “massively”.
Explained charge percentages before gaining amount.
No oomph – no personality. You have permission to slap me the next time I say Sir! I gave up too easily.

Lou
—————–
Interesting to hear, a lot of skirting around the point (errrm’s) can see where I missed a few opportunities to close, too long and drawn out.

WOW! That was awesome. Do I really sound that young on the phone??

There are several things I noticed:

2. Much too much talking by me and not enough ‘open’ questions asked, eg How, Why, When, Where, etc

3. He told me at the beginning of the call that he was still paying into the PPP, but I asked him again towards the end of the call and I expressed great surprise, as if I didn’t know! It sounded insincere and I need to make more notes as I go along!!!

1. Emphasise the Keywords in the Hook

2. Much less talking by myself and cut out the ‘waffling’

4. Hone my listening skills and make more notes as I go along

I feel this has been a great help to me and will ensure I introduce these changes immediately!

Incidentally, this one resulted in an appointment.

This call he had no idea who his pension was with only employer and he has no documents, informed him to through online gov site and trace pension as we cannot help until he know his info. Could have done this much quicker, call was possibly too customer service like.
Said OK far too many times.

I thought I was pretty good. Set up a good callback but he didn’t pick up phone. My fault as I rang at the wrong time. If anything I should have closed him instead of waffling about benefits too much.

You can check out what our customers have to say about IFA Direct Home: Rating: 4.8 from 13 customer reviews and experiences with our financial advisers.

*** was a pleasant man and new what he was talking about. He has also been in touch since the meeting. Very good.

I was very happy with the reviewer who was helpful, friendly and is working to give me up to date information and values of my current and frozen pensions

very good, person very good on the phone, kept upto date with emails and text alerts. The meeting with *** was very helpful and I am looking forward to his suggestions.

IFA Direct Home have launched a new video on You Tube to explain the process from booking a Pension Appointment to the IFA making a recommendation. We hope you enjoy it! 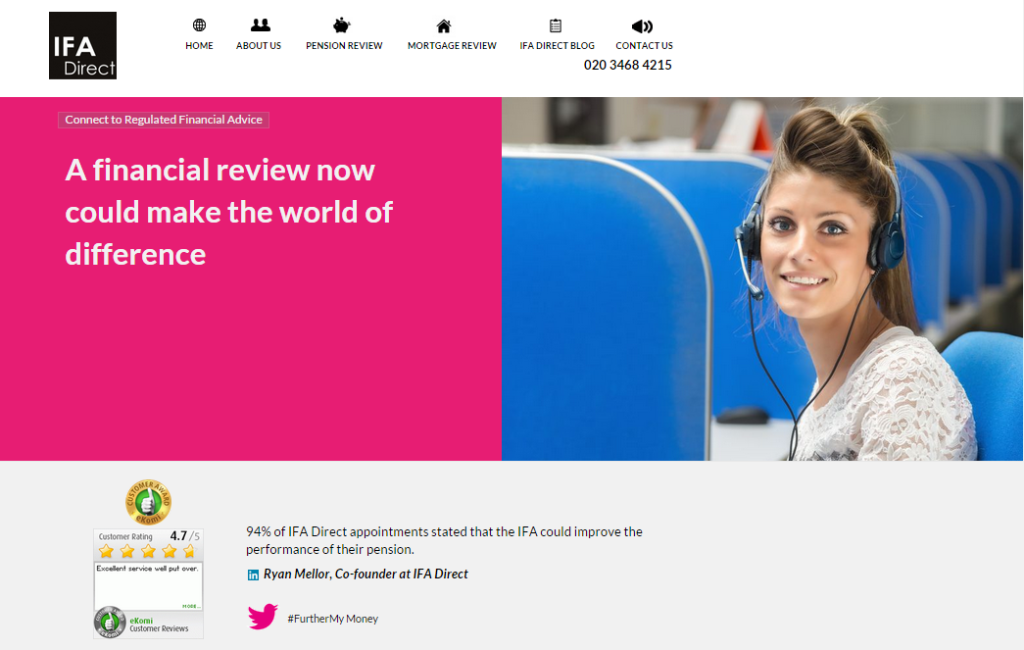 IFA Direct Home the leading appointments making firm that connects people to regulated financial advice today revealed its new look website that is in keeping with other websites within the RMT Group.

The website generates retail appointments for financial advisors that specialise in giving advice for pensions and mortgages.

The re-launch of the website coincides with a new product – IFA Direct Home Mortgage Appointments. Other new features include a link to eKomi  – the German feedback company that collects real customer reviews.

This allows  clients who have sat an appointment with an IFA Direct Home financial advisor to write a review. This is then published on the homepage of its new look website.

The amount of times when running through role play with new members of staff during training that they start the conversation with “How are you today?” I have lost count.

Not only is it false, but it wastes valuable time on the phone. Your aim in a cold call is to get their interest  – deliver the hook or the point of the call  and then get them talking. You have around 20 to 30 seconds at best to achieve this.

You should start the call by saying this is “Hi this is Ryan Mellor at IFA Direct Home, the reason from my call and I don’t know if you are aware but”……gets to point  of the immediately. Stating “I don’t know if are aware” makes the conversation relevant to the person so you are immediately avoiding the classic mistake of talking at the person rather than with them.

At IFA Direct Home when we call consumers, we only use opted-in mobile data which we call during office hours. Very few people like receiving cold calls at the best of  times – but using the phrase “how are you today” when time is at a premium and you’ve never spoken to that person before is one of the most common mistakes made by telemarketers as it has the tendency to wind the person up the wrong way before you have got to your point.

The person taking the call  is much more likely to think this is a sales call leading them to think to themselves that “I am not interested.” For the sake of your own sales figures and sanity to STOP IT IMMEDIATELY!

If you are a financial advisor and you would like to work with us, please visit RMT Direct Leads.